The Galax Fire Department was toned out this morning at 7:50am to a structure fire at 1032 Wagoner Ridge Rd in Ennice, NC off of Glade Valley Rd. Galax Fire was dispatched as Tier II Mutual Aid to assist Glade Creek Fire Department. The initial call came in to Glade Creek as a structure fire with occupants trapped. Upon arrival, the Glade Creek Chief found a well involved 3,000 square foot residential structure with all occupants out of the house. The occupants were alerted to the fire by a passerby and were able to escape. Five dogs were also in the residence. Sadly, only two made it out of the structure. The dog being carried in the photo is Lucy. Galax Fire arrived to find fire throughout the structure and Glade Creek operating two handlines. A sustained 25 mph wind at the time of the fire, pushed the fire through the house to the other end very quickly. There were gusts reported in the 50 mph range at the time of the fire. A defensive attack was ordered. Galax Engine 2 used its deck gun to knock down a large portion of the fire that was threatening a barn close to the structure, then pulled two additional handlines and went to work. Assisting departments were, Glade Creek Fire Dept, Galax Fire Dept, Cherry Lane Fire Dept, Sparta Fire Dept, and Skull Camp Fire Dept. The house was considered a total loss. The cause was believed to be electrical but is still under investigation. No injuries were reported. Galax Fire cleared the scene shortly after 10:00am. Other departments remained on scene. 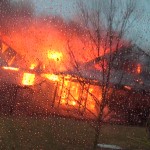 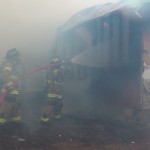 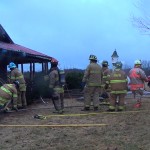