On Tuesday, September 11th, at 9:43am the Galax Fire Department was requested for mutual aid assistance by Independence Fire for a working structure fire.  Independence originally received a call for a brush fire at 1153 N Independence Avenue.  When they arrived, they discovered a double wide trailer on fire.  The home was difficult to access from the roadway.  Galax responded with Engine 2 and Tanker 10.  Units remained on scene until approximately 12:30pm.  Also assisting were crews from Independence Rescue and Elk Creek Fire.  The home belonging to Lewis and Lisa Osborne sustained heavy damage. 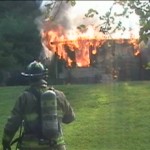 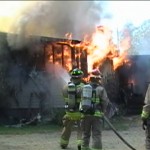