A fully involved barn fire was reported on Windy Ridge Lane in the Fairview community on Monday, July 30th, at 9:14 pm.
Members could see a heavy glow from Rt 89 prior to arrival.  The 1st officer on scene reported power lines very close to
the structure, and he advised that it would be a defensive attack.  The barn was estimated to have 700 bales of hay inside.
AEP was contacted and responded to the scene.  Due to the circumstances, it was decided to allow the barn to burn overnight.
The fire department notified the property owner of the decision and cleared the scene. 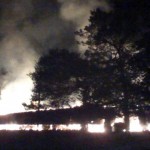