On Tuesday, May 26, 2015, at 10:37am, Galax Fire was dispatched to 4410 Elk Horn Road in the Woodlawn community for a structure fire. A neighbor called 911 and reported smoke coming from a trailer. Upon officer’s arrival, he reported smoke showing from the trailer. Engine 2 arrived on scene, attack crews made entry, and located a small fire in the kitchen area. After extinguishment and overhaul, a cat was located deceased from the smoke. The fire appeared to be electrical in origin, and no one was at home at the time of the fire. Pipers Gap rescue stood-by at the scene. The Virginia State Police also assisted at the scene. All units cleared the scene by noon. 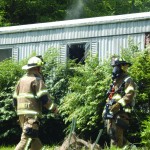