On Thursday, August 21, 2014, at 5:13pm, Galax Volunteer Fire Department and Baywood Rescue Squad were dispatched to a single vehicle accident on Meadow Creek Road near Mt. Vale Church. When firefighters arrived, they found a single vehicle off the right side of the road, over an embankment. The Chevrolet Malibu, which was being supported by a single tree, had a male subject still trapped inside. Advanced Life Support was provided by Galax Grayson EMS due to the severity of the patient’s injuries, and a landing zone was set up at Fairview Elementary School for Aircare. Firefighters cleared the wreck scene around 6 o’clock and proceeded to the landing zone. The patient was flown to Baptist Hospital in Winston-Salem, NC. The Grayson Co. Sheriff’s Office assisted at the scene. The Virginia State Police is investigating the accident. 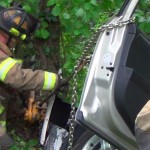 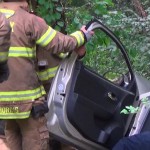