On Monday, March 10, 2014 the Galax Fire Department was dispatched to a reported brush fire at 660 Bowling Lane at 4:10 pm. While members were preparing to leave the station, dispatch upgraded the call to three structures on fire with the primary residence threatened as well as a spreading brush fire. Members switched from brush to structure gear. Engine 2 was first out the door with 6 members. 301 arrived on scene confirming the dispatch and advised the porch to the residence was on fire. Chief requested a second alarm. Engine 2 arrived and quickly knocked down the fire involving the porch, then began extinguishing the already collapsed, nearby barn. Brush 14 and Brush 13 arrived and attention was focused on the spreading brush fire. Forestry was notified and the dozer was requested. After an hour long firefight and multiple long forestry line lays, the fire was contained. Complete extinguishment and mopup took about two hours. Crews cleared at approximately 6:30, only to find a second brush fire in a field about one mile away from the original fire. Brush 14 and Brush 13 made quick work of this fire. All units were back at the station by 7:00 pm for an hour long cleanup. 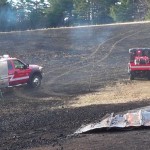 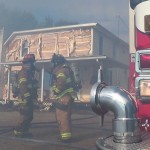 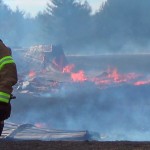 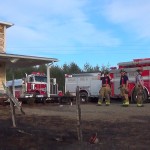