On November 11, 2012, late Sunday afternoon (4:43pm) the department responded to a brush fire endangering a structure at 129 Winterberry Road. Upon Brush 14’s arrival, firefighters found a 1983 Chevy Camaro, several small structures, and less than an acre of property involved. The fire was brought under control within a few minutes, and the department remained on scene for just under an hour. Randy and Janette Triplett owned the property. Pipers Gap Rescue treated a subject at the scene for minor burns to the arm. Firefighters saved two pheasants. 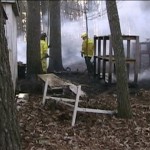