On Sunday, September 23, 2012, at 9:07pm, the department was dispatched for a barn fire on East Winds Lane off of Davis Knob Road.  Upon arrival, the barn was fully involved and mostly collapsed.  The barn contained approximately twenty round bales of hay.  The department used defensive tactics to protect the surrounding property.  Kenneth Belton was the owner of the barn and hay.  The department remained on scene for a little over an hour.  Glade Creek Fire Department sent a tanker, but they were cancelled while en route.  On Monday, the department sent an engine back to the scene for a rekindle (no alarm dispatched). 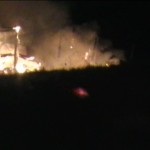