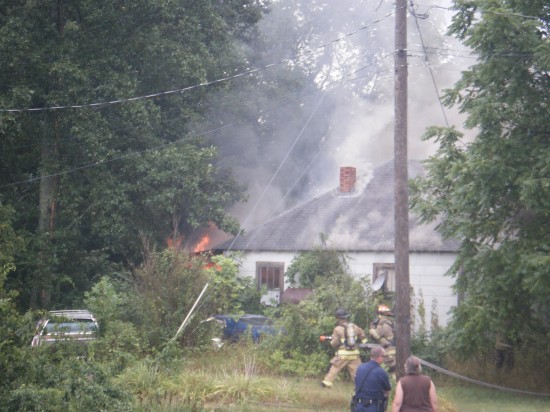 On Wednesday, July 27th, the Galax Fire Department was dispatched to a two vehicle accident with injuries on Creekview Drive in Carroll County. A four door passenger vehicle was struck from behind by a pickup truck. Arriving members found Galax Grayson EMS and Pipers Gap Rescue removing a critically injured, untrapped patient from the drivers side of the vehicle. This patient was airlifted to Baptist Hospital from a landing zone set up by second alarm Galax Fire units at Gladeville Elementary School. Once the first patient was removed, fire department members began removing the roof of the vehicle to stabilize and extricate a patient from the back seat. Thsi patient was complaining of severe back and neck pain with some numbing. The patient was removed and care turned over to Galax Grayson EMS who transported the individual to Twin County Regional Hospital. A third victim, who self extricated, was transported by Galax Fire Rescue 5, to TCRH with minor injuries.
On Saturday Morning at 5:00am, the Galax Fire Department was tone out for a mutual aid call to assist the Skull Camp NC fire department with a commercial structure fire in Low Gap. A fire truck left overnight for repairs inside of LHB Garage in Low Gap caught fire, destroying the fire truck and causing smoke and heat damage throughout the garage. Galax Fire assisted with overhaul of the truck and structure and then with pickup duties…replacing hose and airpacks, and tearing down the water supply dumptank.
On Saturday evening, members were called to Oriole Lane in Grayson County for a reported structure fire. This turned out to be a controled burn and false alarm.
On Sunday afternoon at 2:29pm, the Galax Fire Department was dispatched to a possible structure fire at 7210 Carrollton Pike. First arriving units found smoke throughout the residence. Upon investigation by members using thermal imaging cameras, the source of the smoke was found to be a ballast in an eight foot light fixture in the basement. The residence sustained no permanent damage.
As members were preparing to leave the first call, tones sounded for a second structure fire in the 700 block of Cliffview Rd. Witnesses said lightning struck the vacant residence. First arriving units found heavy fire in the rear of the structure with smoke throughout. The heat was intense enough to cause the windows to blow out of the structure. Members initially fought the fire from the exterior. Once all visible fire was knocked down, crews repositioned to the front of the structure and made an interior attack to complete extinguishment. All this in temperatures close to 90 degrees! Members cleared the scene in one and a half hours.
Thanks to the Pipers Gap Rescue Squad for providing EMS standby at both of Sunday’s fires.